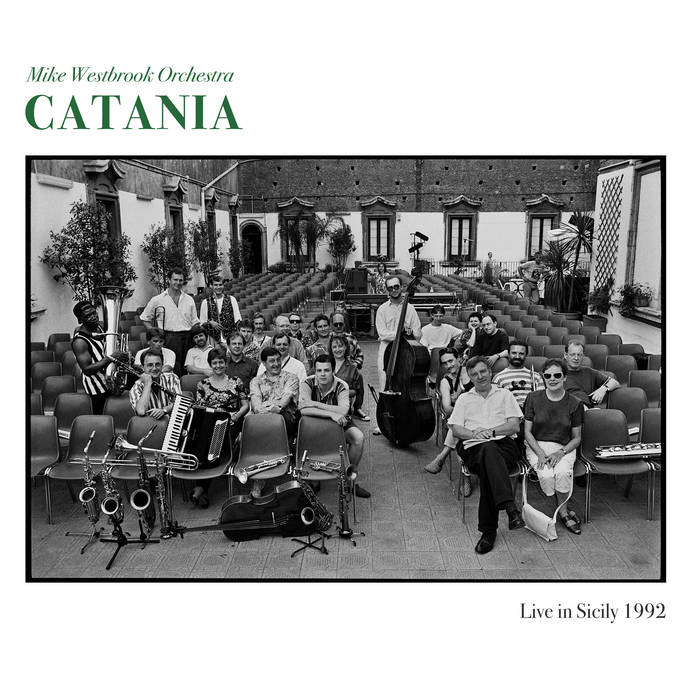 For technical reasons, most of the album is taken from the last night of the three-day festival. Even so, the recording was a haphazard affair. An incomplete recording of the sound desk mix was made on a DAT Walkman. Someone in the audience had made a cassette, and a forgotten set of reel-to-reel tapes had been gathering dust for twenty-five years on a shelf in Filippo Bianchi’s Rome apartment. It took all the skill of the late Jon Hiseman, as well as the know-how of Jay Auborn and Callum Godfroy to make a compilation from these various sources that is not only listenable, but as true and vivid a record of ‘live’ performance as one could wish.

The July 26th concert, The European Song Book drew on three decades of my compositions. The album begins with three pieces from Citadel/Room 315, written in 1974 to a commission for Swedish Radio as a feature for John Surman. Alan Barnes, Ellingtonian to the core, gives this fine account of View From The Drawbridge. This is followed by an extended workout on Love and Understanding, a piece that captures the spirit of that summer night on the rooftop in Catania. Alan Wakeman’s solo runs the gamut of the tenor saxophone. Paul Nieman is eloquent on trombone, then Pete Whyman turns up the heat on soprano. James McMillan wraps things up on trumpet. This selection from Citadel concludes with Tender Love and the luminous soprano saxophone of Chris Biscoe.

Leñador elicits a moving performance from Kate, accompanied by Frank Schaefer’s cello. She chose the poem Cançion del Naranjo Seco by Lorca for inclusion in The Cortège, a work largely inspired by the Brass Band’s tours in Italy in the 1970s. The Catania performance drew a masterly piano solo from Pete Saberton and a passionate solo from Danilo Terenzi.

Along with Phil Minton and Dominique Pifarely, Danilo was one of our special guests, - this was the last time he played with us, within three years he had died of cancer at the age of thirty-nine. In the years immediately following Catania we also lost Pete Saberton, trumpeter Dave Plews, our tour manager Phil Clarke, and a long-time friend of the band Margery Styles.

With Song of the Rain, Phil recreates one of our ‘classics’ from Mama Chicago, the Jazz Cabaret with which The Brass Band won the Edinburgh Festival Fringe Award in 1978. It has what the late Mike Kustow always referred to as his ‘God-given’ lyric. Phil shows himself to be a master of the jazz ballad, an idiom into which he rarely strays. This was the first and only performance to include the vibraphone solo by Anthony Kerr.

Disc One concludes with a piece from the first Catania concert on July 24th, a performance of Big Band Rossini, by then well established in the repertoire. A few weeks later Big Band Rossini had the distinction of being the first jazz work ever to be presented in the BBC Proms. Catania saw the first-ever public performance of Factotum al Bebop, one of our most challenging arrangements. With the addition of some extended episodes for solos, this piece sticks closely to the structure of Figaro’s celebrated aria Largo al Factotum from The Barber of Seville. I wrote this to feature soloists Alan Barnes and Anthony Kerr, both newcomers to the band.

Disc Two opens with Phil’s rendering of the William Blake song I See Thy Form, part of the score of Adrian Mitchell’s musical tribute to Blake, Tyger, which was staged by the National Theatre in 1971. Phil made the song his own in the early days of the Brass Band, and so it has remained through countless performances over the years in many different situations, and with all kinds of bands. For Catania, I decided to bring out a high trumpet arrangement never before heard outside the recording studio.

The second night’s concert, The Orchestra of Smith’s Academy, focused on recent original compositions such as After Smith’s Hotel, On Duke’s Birthday and London Bridge. It included the premiere of Measure For Measure, at that time very much a state-of-the-art work. The Catania recording was unusable. Fortunately, there was the opportunity to record it shortly afterwards, at the Crawley Jazz Festival, for the Orchestra of Smith’s Academy album. However, we are able to include the Catania performance of I.D.M.A.T. a de-construction of Ellington’s It Don’t Mean A Thing. I wrote it originally in 1990 for a John Harle album. It was recorded but never released. Our version includes solos by Pete Whyman and Anthony Kerr. However, I.D.M.A.T. is primarily a band vehicle, and a reminder of the technical excellence achieved by this ensemble, with special credit to the lead work of Graham Russell and Dave Plews, and the drumming of Peter
Fairclough.

The Trio with Kate and Chris Biscoe has been a constant since the early 80s. Billy Strayhorn’s immortal Lush Life has long been a cornerstone of the Trio’s repertoire. Kate’s soulful interpretation is matched by Chris’s introduction on alto with, for this occasion, the addition of cello.

Dominique Pifarely, one of the original creators of On Duke’s Birthday in the mid-80s, was a guest on the second night. South from Toulouse, a celebration of life ‘on the road’, recalls mini-bus tours with the Brass Band. It was originally written in 1983 as part of After Smith’s Hotel. The piece has been in and out of the repertoire ever since, but not previously been on CD. Here in Catania, it is introduced by Frank Schaefer’s cello, then features Alan Barnes’ alto saxophone followed by Dominique’s violin.

Steve Berry’s bass introduces our second William Blake song, Long John Brown, a dark, expressionist piece and a vehicle for Phil’s vocal range. He has performed the song in many contexts, but this the first time that the big band version has been on CD. Alan Wakeman solos on tenor.

The songs of Bertolt Brecht and Kurt Weill have been an important part of our repertoire for years. Kate gives her distinctive take on this classic torch song, Surabaya Johnny from Happy End, a song she has often performed with the Trio. I made this arrangement for brass especially for Catania, and this is the only time it has been played. More improvising from Alan Wakeman, this time on soprano.

Alabama song from Mahagonny is a Brecht/Weill song that has become a regular war-horse for the big band. The arrangement is a kind of loose assembly of ideas that have accumulated over the decades. I first arranged it for The Orckestra, a collaboration between the folk singer Frankie Armstrong, Henry Cow and the Brass Band in the mid-70s. It’s been played by every combination since. It takes the Brecht/Weill oeuvre out of the concert hall and the opera house and onto the streets. I think Brecht would approve.

A concert of musical and emotional extremes, the last night came towards its close with the tranquility of The Beatles’ Golden Slumbers and the unison voices of Kate and Phil. Apparently, the recording failed at that point, so we are unable to include that song. However, you can hear them sing it on the After Abbey Road album. They then lead us into the grand finale of The Topers’ Rant, John Clare’s paean to good ale and good fellowship. This song was originally part of a Brass Band theatre and TV show, Hotel Amigo, in the early ‘80s. This expanded big band version became part of The Cortège. The three alto saxophones play a be-bop counterpoint to the vocals, before trading ‘fours’ with the violin. Later there’s an exchange between Paul and Danilo, two trombonists meeting musically for the first time. The three altos have the last word before everything ends in confusion and the musicians disperse into the crowd. The music fades away, leaving an empty stage.
Mike Westbrook

With thanks to Steve Berry, Filippo Bianchi, Justin Hill and Paul Wilson at the British Library.

with the support of 𝑨𝒊𝒓𝒔𝒉𝒂𝒇𝒕 𝑻𝒓𝒖𝒔𝒕 and the Patrons of The Mike Westbrook Orchestra.

Mike Westbrook, composer and pianist, has received many honours and his outpouring of work in a career stretching over 50 years, ranges from scores for full orchestra to solo piano improvisation.

Bandcamp Daily  your guide to the world of Bandcamp